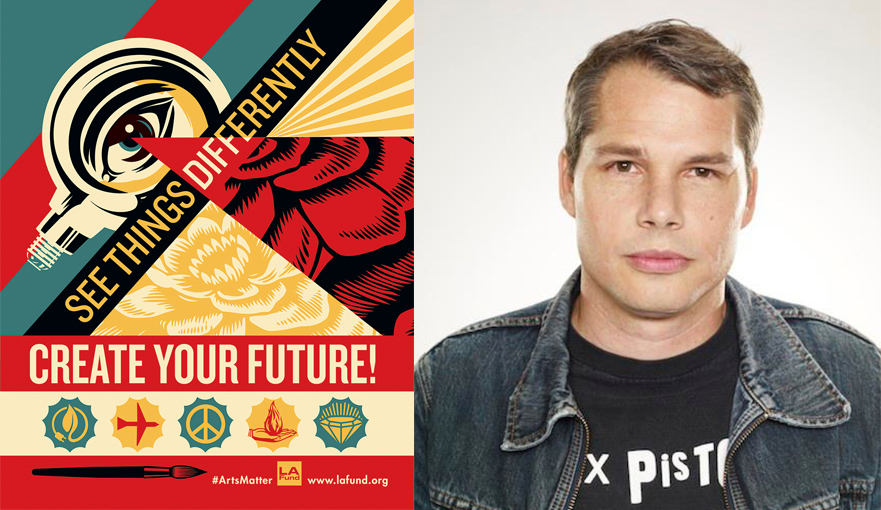 Posted at 12:04h in News by support@citrusstudios.com

I was honored and proud to be a part of the Los Angeles Fund for Public Education’s #ArtsMatter public art project last July to inspire creative thinking and learning. Considering my belief that the arts are a crucial part of education, it was an easy decision for me to be part of this. When they presented the facts- at the time only 2% of elementary school instructional time in LAUSD was being devoted to the arts – I cringed. To be considered for this project was very important to me, and it was a bonus that my artwork was presented alongside such accomplished and influential artists like Barbara Kruger and John Baldessari.

I believe that art can serve children in a therapeutic way as a unique form of problem solving and every child should have the opportunity to explore their creative side, in LAUSD and beyond! Art has always been such an important part of my identity and growing up I was very lucky to have parents who eventually recognized this and invested in my skills by increasing my arts education. I attended Idyllwild Arts Academy in 1987 and went on to study art at Rhode Island School of Design. Art is tangible and whenever kids make art, it gives them something to hold and be proud of. When I see kids make art, I see them dream.

It’s so important to provide kids with creative outlets and equally as important to inspire them to engage the world around them and involve themselves in meaningful causes. By partaking in this project, we were able to combine the artistic vision of the kids with the campaign’s needs to raise awareness and prove that art does matter. I was impressed with the results and the creativity that I was presented with from the participants. I also found that giving children the ability to contribute to their community gave them a sense of fulfillment, which in turn inspired me even more. I thought it was a great idea to use social media and the various forms of communication to engage a younger generation.

Creativity is invaluable in students’ lives because it cultivates problem solving, boosts self-esteem and promotes communication. Students want to express themselves and find their voices. Art and music are outlets that manifest differently for every individual which provides a perfect antidote for the frustrations of homogeny. Creativity fosters imagination and independence, but builds community at the same time.

I am extremely inspired by children. I want my own kids and kids across the globe to use creativity, particularly art and music, to help change the world and make it a better place.

Shepard Fairey is an American contemporary street artist, graphic designer activist and illustrator. He first became known for his “Andre the Giant Has a Posse.” He became widely known during the 2008 U.S. presidential election for his Barack Obama “Hope” poster. His work is included in the collections at The Smithsonian, the Los Angeles County Museum of Art, the Museum of Modern Art in New York City, the Museum of Contemporary Art San Diego, the National Portrait Gallery in Washington, D.C., the Virginia Museum of Fine Arts in Richmond, and the Victoria and Albert Museum in London.