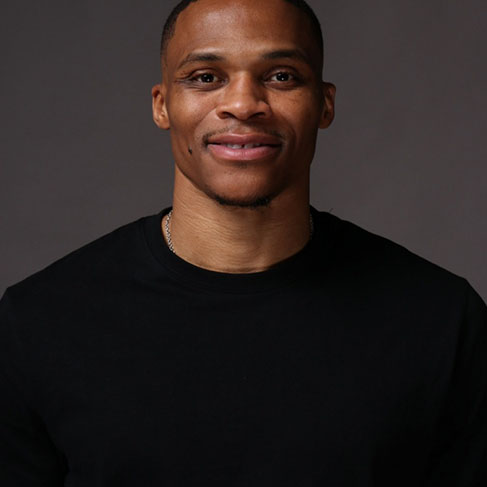 Russell Westbrook, III was born in Long Beach, California. Russell’s father trained him and Raynard, his brother, in football and then basketball while his mother made sure they were equally focused on academics.

In high school is where Russell’s mantra of “Why Not?” was born. Every time he, his friends and his family faced adversity instead of being defeated they asked themselves, “Why Not?” and worked even harder.

After two years at UCLA Russell opted to leave school and pursue a professional career. Many thought this was the wrong decision but Russell believed in himself and “Why Not?” He was selected fourth overall by the Seattle Supersonics in the 2008 NBA draft, which became the Oklahoma City Thunder shortly thereafter. During his career Russell was named a nine-time NBA All-Star, won two scoring titles, two NBA All-Star game MVP awards, and was named the NBA MVP for the 2016-2017 season. Russell, now a member of the Washington Wizards, is just the second player in NBA history to average a triple-double for an entire season.

Russell’s accomplishments go far beyond the basketball court as he started the Russell Westbrook Why Not? Foundation in 2012. His foundation is dedicated to inspiring the lives of children, empowering them to ask “Why not?” and teaching them to never give up. Giving back to his community is important to Russell and he was recognized for his philanthropic efforts in 2015 when he received the NBA’s season long Community Assist Award.

As chairman of Russell Westbrook Enterprises, Russell brings together his relentless work ethic and his earnest pursuit to positively impact his communities. Russell Westbrook Enterprises connects Russell to the wider business world and is a vehicle to help Russell positively influence communities by providing products, services, resources and employment opportunities.

In 2015 Russell married his college sweetheart, Nina, who also played basketball at UCLA. Nina is a marriage and family therapist and owns a children’s and lifestyle boutique in Oklahoma City. Russell and Nina are the proud parents of a son, Noah, and twin girls Skye and Jordyn.