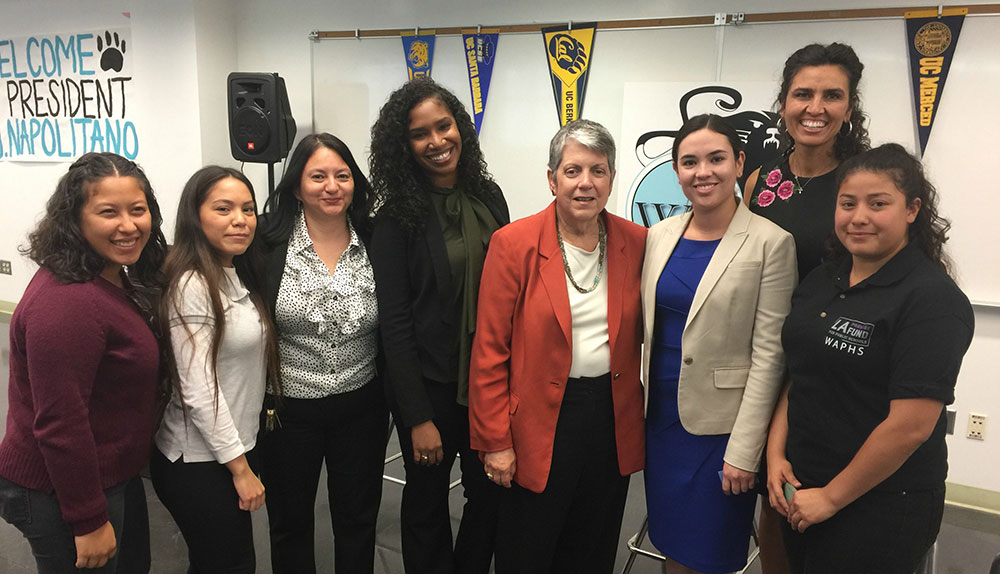 Posted at 08:21h in Home, News by support@citrusstudios.com

West Adams Preparatory High, an LA Promise Fund-partner school, is home to 1500 students, 90% of whom are living below the poverty line, and 31% of whom are English learners. Despite these challenges, over 80% of the Class of 2017 was accepted into college. This high rate reflects the students’ hard work, as well as the hard work of the parents, teachers, administrators, and college center staff who support them. The LA Promise Fund and West Adams encourage students to aim high and to attend college, even if they will be the first in their family to do so.

Last Thursday, the LA Promise Fund organized an event at West Adams where students had a chance to talk with University of California President Janet Napolitano about access and admission to the UCs. A group of 80 seniors were curious to get answers to their questions: Are the UCs within their reach? How will they get into a UC, and should they be lucky enough to gain acceptance, how will they afford to attend one?

One student attending the event has been thinking about college since he was in middle school. “For years, I wanted to get into college and prosper. But I’m undocumented and I learned I couldn’t apply for federal aid. That was something that really got to me. I was like, ‘I won’t be able to pay.’”

President Napolitano told him that even though undocumented students don’t qualify for federal aid, California has a separate “DREAM Loan” program that helps cover the cost of attending a UC campus. She explained, “We don’t want finances to get in your way. We will work with you on financial aid.”

Daysy, a student at UCLA, an undocumented DREAMer, and a guest brought by the President, chimed in. She said, UCLA “has given me a lot of financial and legal support” and encouraged students to “never think that your citizenship status should hinder you from getting into higher education. On the contrary, it should inspire you.”

After listening to President Napolitano, the undocumented student said he was relieved to learn that “there are programs out there that can help me. I can get what I need to go to college.”

He wasn’t the only student listening closely. Sixteen-year old Isaac Kim was happy to hear from another of President Napolitano’s guests, UCLA’s Director of Admissions Gary Clark. According to Isaac, “It was great to see him because admissions are the most important thing for us right now.”

Mr. Clark explained that UC admissions officers are looking at more than just grades – they’re interested in students who work after-school jobs or take care of younger siblings. He said, “We want to know what kind of a community member you’re going to be, not only what you’re like in the classroom.”

For Isaac, this was a valuable lesson. “I know students who are discouraged to apply to certain schools because they think their grades aren’t good enough. But in reality, schools are looking for people, not machines. That’s what some kids aren’t aware of.” 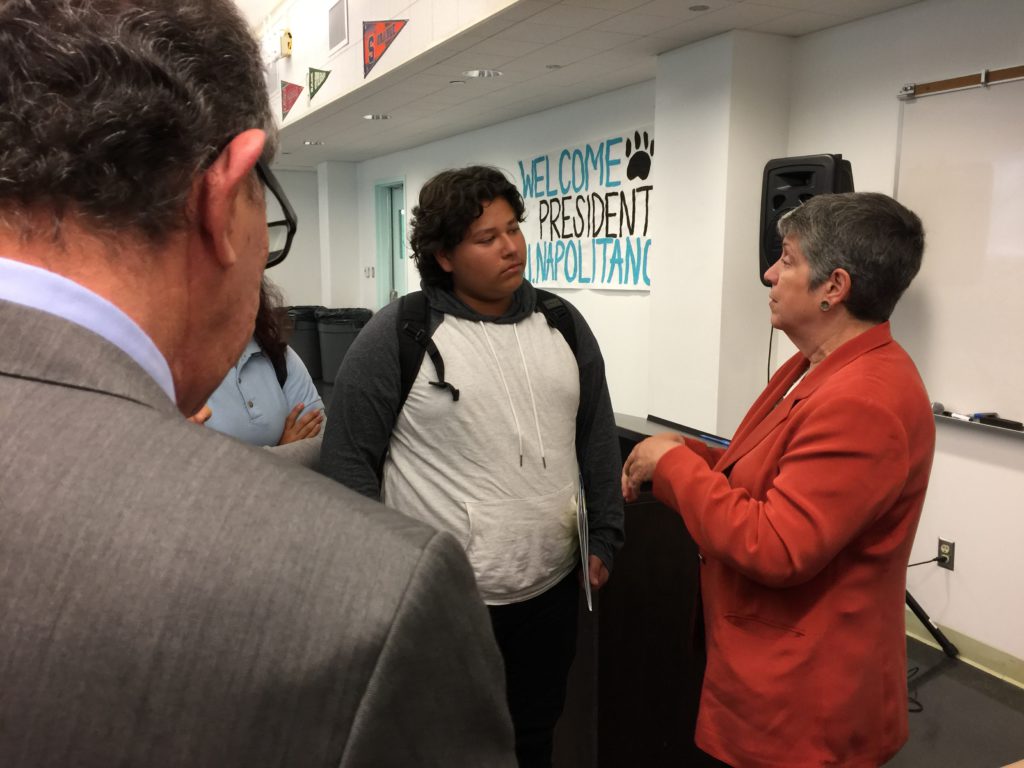 Over the course of the hour-long conversation, President Napolitano was able to inspire and reassure some of West Adams’ most promising seniors. They left the discussion armed with a better understanding of what the UCs can offer them – and of how they might bring their own history and knowledge to the “finest research institutions in the world.”

The LA Promise Fund is invested in making opportunities like this available to the students at its schools and partner schools. Our vision is to radically improve the future of LA communities by increasing educational equity and ultimately closing the opportunity gap.

Ted Carmichael is a freelance writer, editor, and researcher. See his work at http://tedcarmichael.wixsite.com/writer

See the New York Time’s coverage of this event.