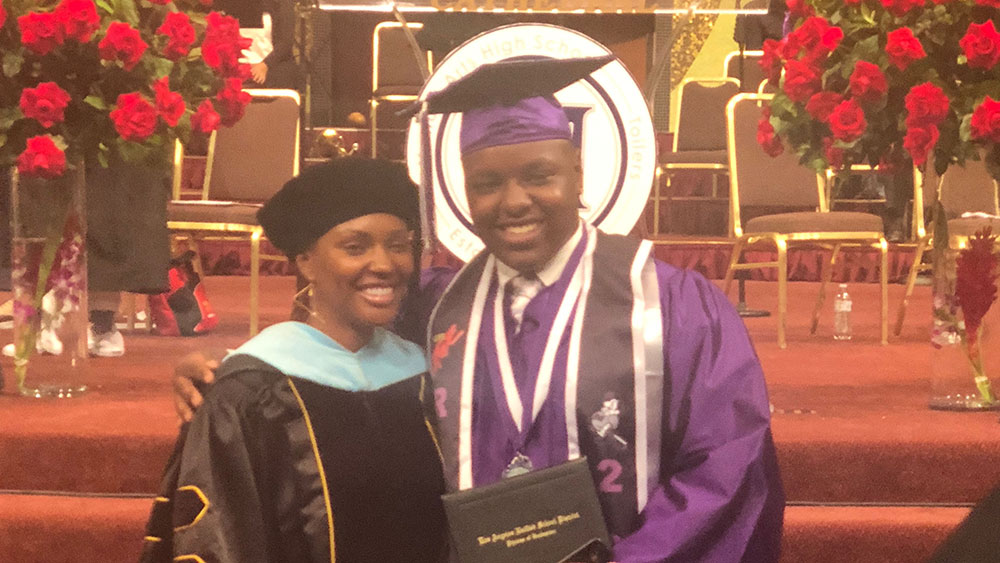 Posted at 04:42h in Home, News by support@citrusstudios.com

This year, 91% of Manual Arts High School seniors were accepted to college. Lonnell Shuler is one of those seniors.

He is headed to Colorado College, an extremely competitive small liberal arts college with an acceptance rate below 16% and an average SAT score of 1400. He will attend with a full ride and an additional scholarship through the Robert & Susan Kozlowski L.I.F.T. Foundation.*

Lonnell came to Manual Arts as a freshman, transferring from his neighborhood school. “I found this a friendlier environment,” he said. “It was easier to assimilate. I joined JROTC, debate, and the Black Student Union (BSU); I became a college ambassador. There’s so much to do here. It’s easy to get involved; it’s easy to make friends.”

An activist in the community

Lonnell has been involved outside of school, too. He participated in the Bruin Guardian Scholars Academy (BGSA). Through BGSA, Lonnell learned about a nonprofit organization called Black Women for Wellness. It is “an organization that believes in the health and wellbeing of women and girls in our community,” Lonnell explained.

Working with the nonprofit, he became the first peer educator to “teach comprehensive sex ed classes for high school students in South LA.” He became passionate about wellness and sex education, traveling to Washington D.C. to meet with Kamala Harris and Maxine Waters to advocate for sex ed classes on a national scale. “This was one of the most important things I got from this job,” said Lonnell.

All of this effort has not always been easy. “It’s been really hard. I work; I’m at school; I’m very involved. I even took Theatre 200 at LA Trade Tech.” He was taking this college-level class twice a week, from 7pm until 10pm, at which point he would go home and do homework. On weekends he sometimes traveled for debate, and on Sundays, he is the youth pastor at his church.

“I’m the eldest of 3 brothers. I try to be a role model for them,” said Lonnell. “I always knew that I wanted to do something different – get education – make it out of the ‘hood – to be able to come back and make it better.”

He has already made progress towards this goal. Now, he’s headed to Colorado College, where he hopes to major in political science and public policy, with an emphasis in pre-law.

“I wanted to go out of state to get free of the obligations I have here – and of the bad memories,” Lonnell explained. “I am interested in seeing the impact I can make at Colorado College. It’s a whole new world that I haven’t seen. Colorado College is a really outdoorsy school. They go skiing; they travel; they hike. That’s the opposite of what I like to do. I like to stay at home, read and listen to music. I think this new environment will help push me to work on everything that I want to improve about myself.”

Lonnell chose Colorado College over UC Santa Barbara, where he could see himself being comfortable, after his counselor advised him “that in order to break boundaries, I have to get comfortable being uncomfortable.” He added, “I’m hopeful and optimistic that I made the right choice.”

Lonnell has made a mark on all of those who have seen him push himself, engage with opportunities, inspire his peers. He is so exceptional that the Robert & Susan Kozlowski L.I.F.T. Foundation, which grants scholarships to those who will be the first in the family to attend college and who attend a California university, has made an exception for Lonnell – supporting him as he attends Colorado College. He will be the first student in the foundation’s 10 year history for whom they will make this exception.

*Robert & Susan Kozlowski L.I.F.T. Foundation provides scholarship, wrap-around supports, and mentorship to students to ensure that they go to and through college.