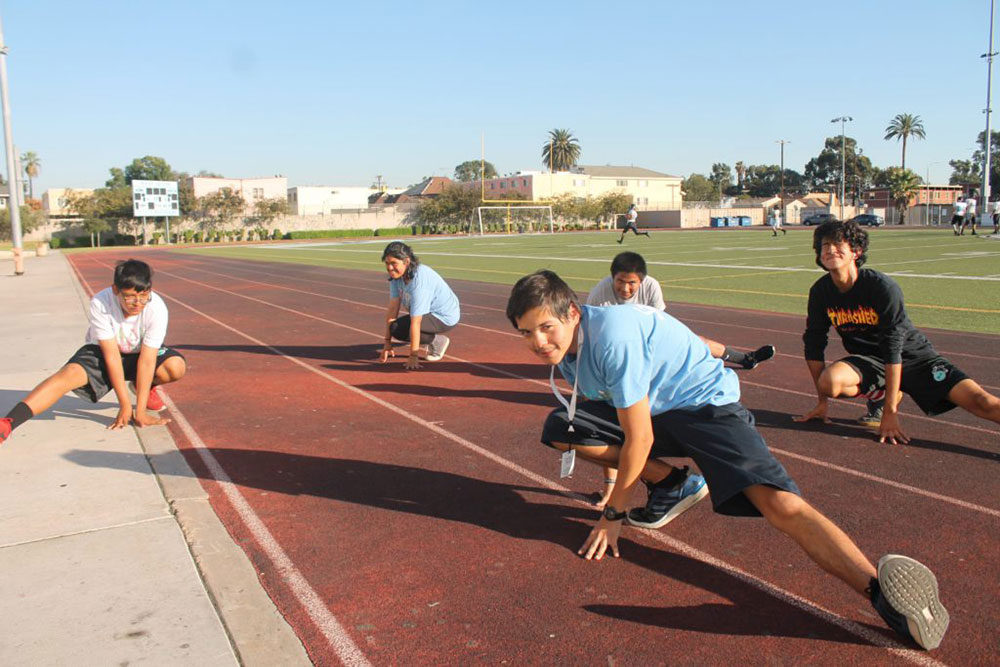 Posted at 07:28h in Art, Home, News by support@citrusstudios.com

On an afternoon in the middle of October, as temperatures neared the triple digits, a small group of students met at the track at West Adams high school. While the rest of the school was rushing to get into the shade or an air-conditioned building, these students did a few stretches and then started running laps under the hot sun, with their coach holding up his stopwatch and calling out their times.

As members of the Marathon Club, these students had become accustomed to hard work. Most of the students were freshmen and sophomores, in their first year with the club, but two veteran runners had come to set an example—Andy, a returning senior, and Kevin Peralta, the coach, who ran in Marathon Club while he was a student at West Adams (Class of 2014). For Andy, practice has become a habit. “When you start running it you don’t even feel it, you’re just in the zone. One of our former coaches used to say, it’s not in the body, but in the mind. It revolves around whether you can believe in yourself.”

Marathon Club prepares students to compete in the LA Marathon through weekly practice and by registering students to participate in shorter competitive runs throughout the year. It’s an ambitious goal, and it calls for a lot of work from students. The club runs three days a week after school and on Sundays, along with any competitions. Even when he’s feeling overwhelmed with AP classes and college applications, Andy tells himself, “I still have to go to marathon practice—I’ve committed to this.” That’s exactly what Kevin wants to hear, because he hopes that Marathon club will foster discipline in the students, as athletes, students, and people.

The goal of Marathon Club, just like the challenge, deals as much with the mind as with the body, and students who commit themselves to the club learn more than how to run a marathon by the end of the year. Runners learn how to set a series of goals when trying to improve. “I realized that if I just focused on that main goal, it felt like too much, and I would think I couldn’t do it,” Andy says. “So I thought, okay, I’ll see if I can reach this more manageable goal.” He has found that this translates into several skills, which he can apply in other areas of his life: breaking a hard task into pieces, setting clear goals and monitoring his progress towards them, challenging himself to leave his comfort zone, and following through on commitments.

“Throughout the years I’ve seen that if students do the marathon, they’re more dedicated in school or in any interest that they have,” Kevin says, reflecting on the runners from his vantage point as coach. But Kevin, who is still running marathons, also sees evidence for the positive impact of Marathon Club when he looks at his own life. At the beginning of high school, he didn’t want to be involved in any of the extracurricular programs West Adams offered: “I was one of those students who never liked staying after school at all. Nothing held my interest.” A friend finally convinced him to spend an afternoon with Marathon club; since it was midway through the year, they were doing a long run, something between five and ten miles. Kevin found that he was a naturally talented runner—he finished that whole run—and he found that he liked the practice, even though it was exhausting. He ran in Marathon Club for the rest of his time in high school, and when he graduated, he asked his coach if there was any way he could continue to be involved. His coach recommended Kevin to LA Promise Fund as a volunteer for the team, and after a few years of volunteering he was given the opportunity to coach the club he’s never left. “It made me a more dedicated person,” Kevin says. “Especially right now, while I’m in college [studying business and marketing at CSU DH], it helps me be more disciplined. In my statistics class, I was failing, and I thought, why don’t I do this in a similar way to marathon practice? I practice for a set amount of time until I’m ready for the class, until I learn the material. So Marathon Club has improved my work ethic.”

In a habit he learned from Marathon Club, Kevin is setting a goal for himself this year as coach. “Every student I have right now, I want to maintain. I want to tell them that they should see if they can make it: if they stay in the club long enough, they might really enjoy the sport.”

Peter Horton, the LA Promise Fund School Workforce Coordinator, works to support students at Manual Arts by connecting them with mentorships, internships, and extracurricular programs, including The Intern Project and Girls Build LA. 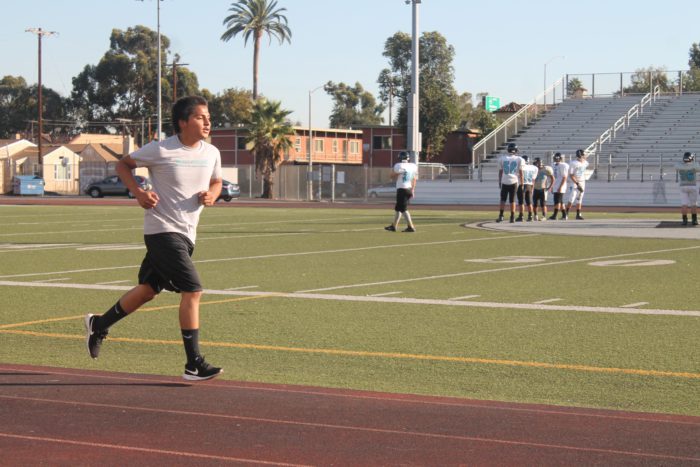