Posted at 08:04h in Art, Home, News by support@citrusstudios.com

Step inside Manual Arts High School, turn left, follow the long corridor past the office, past the science building, turn right when you hear the sound of music, and you’ll arrive at Mr. Romeo Vera’s band classroom.

Vera is an engaging and dynamic man, with a quick pace and a broad smile. He is also a passionate teacher and a dedicated musician.

“When he teaches, he’s hard on us,” says sophomore Ashley Diaz, who entered the band last year. “But that makes us great.” Fellow sophomore Paula Lopez agrees: “He expects a lot. He’s a really great teacher.”

One of his great prides is the Grammy Signature Award his band class won in 2010. The award is a prestigious recognition of an excellent band program that came with a $5,000 grant and thousands of dollars worth of equipment.

In the seven years since he received the award, Mr. Vera has often thought about what it would take to win a second award. The award is a gilded gramophone, like the coveted musical award, but cut in half and mounted in a frame hanging on his classroom wall. Wouldn’t it be nice, Vera thought, to get the other half?

This year, the band has fulfilled that promise: on October 23rd, they will perform at the Grammy museum and receive their award, along with a grant of $7,500 for three years. The application process was rigorous. To prove that Manual Arts has an exceptional music program, Vera submitted recordings of the band performing and of himself teaching lessons. He also had to propose innovative uses for the money, including starting a percussion ensemble from scratch and collaborating with a composer. The percussion ensemble is already meeting, and the composition is a long term goal. Over the year, the band hopes to commission a piece that will capture the spirit of the school, a piece they would then perform for its world premiere.

Growing the band program to its present strength has taken a lot of work, from Vera and the students, as well as the counselors and the administration. Whereas more affluent schools can rely on feeder programs, at Manual Arts most students have little prior experience, and 9th graders wind up with Beginning Band on their schedule just “by happenstance,” Vera says. For the students to catch up in just a few years, they need to be self-motivated, and Vera sees his job as creating the circumstances for students to be successful.

“It takes a lot of hard work to get to that place,” he explains, “but then the motivation becomes intrinsic. I just have to find the spark to light that fire.” Part of that hard work is practice—thanks to the previous grant and other fund-raising, every student in Advanced Band is able to take their instrument home and is expected to practice as homework; they also practice together four days a week after school.

The band took advantage of another opportunity to practice earlier this year when they performed publicly in Exposition Park. Claudia Keller at the LA Promise Fund was able to arrange for the band to play before a live-streamed performance of Carmen from the LA Opera. On September 23rd, a warm Saturday evening, the band, together with Mr. Gronlund’s choir class from Manual Arts, entertained the crowd for forty-five minutes. The students had only been practicing together for a few weeks since returning from summer vacation, and twenty one of the thirty two students in the band were only entering their second year of playing—but the crowd was delighted and impressed, as was the teacher. “They couldn’t have done better,” Vera said, considering their experience and the amount of time they had to prepare this year. “Last year’s band couldn’t have done this. No band in twelve years could have done this.”

Most of the students who played in the park don’t aspire to become one of the musicians who showed up on the screen a while later, playing in the opera. But their experience in band can help them grow, regardless of their future plans. “I can’t enumerate the benefits,” Vera said—all the same, he tried to list a few. Taking the instruments home, the students learn to respect the equipment and develop responsibility. At the end of a class period, they’re responsible for cleaning the room. In a performance, they also come to feel a sense of group responsibility, the importance of meeting their peers’ expectations.

“Performing is a source of power and strength,” Vera says. “It will make them more comfortable down the line being up in front of people. Over years in the band program, kids grow gregarious.”

And when the band prospers, they help all the students, faculty, and staff at Manual Arts hold their heads high. Vera knows that the band is seen as a reflection of a community: “We just have to sell our vision—we want to be a beacon of greatness. We want to be something the school, the community, the city can look up to.”

Peter Horton, the LA Promise Fund School Workforce Coordinator, works to support students at Manual Arts by connecting them with mentorships, internships, and extracurricular programs, including The Intern Project and Girls Build LA. 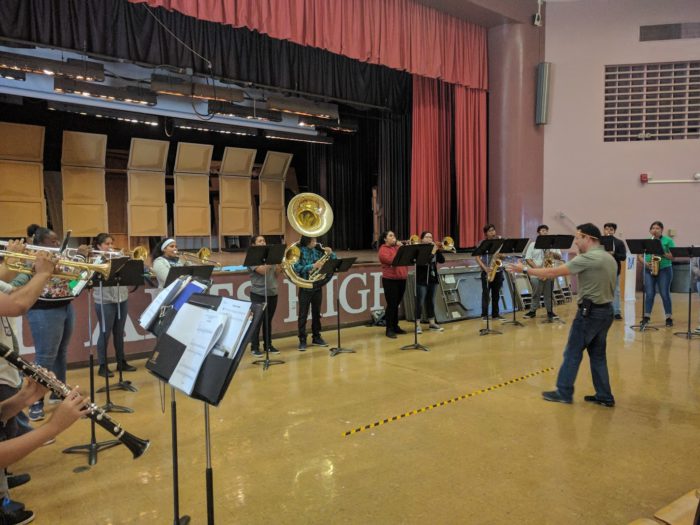