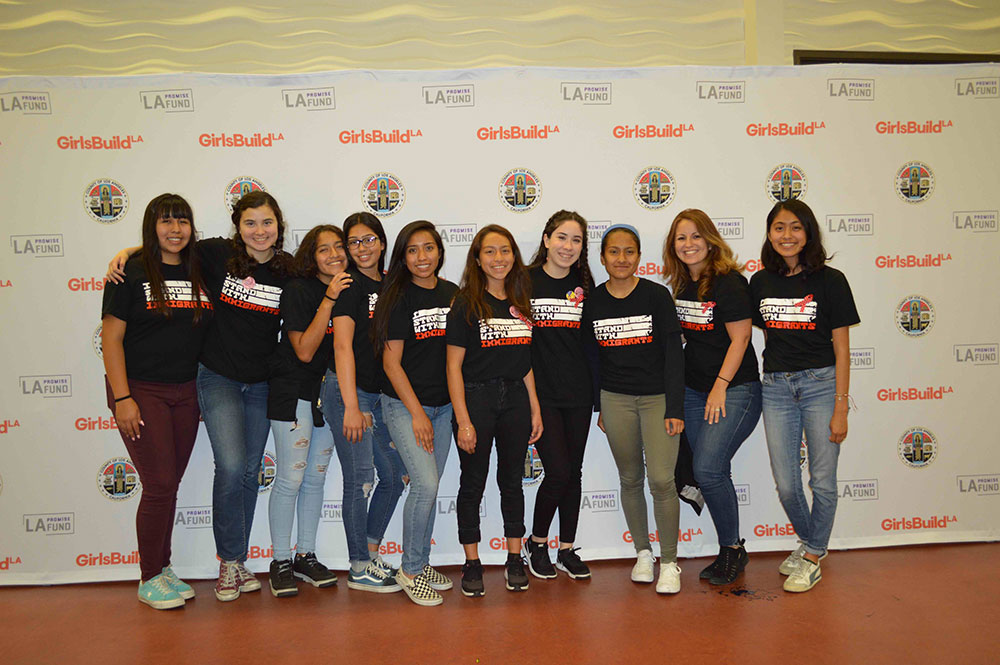 Posted at 04:51h in Home, News by support@citrusstudios.com

After a year of working to make a change at their schools and in their communities, dozens of Girls Build LA teams came together at USC’s Ronald Tutor Center to show each other everything they’d accomplished. Part science fair, part political rally, part community health seminar, the room buzzed with energy and ambitious ideas (and some Beyoncé, as the teams arrived and arranged their displays).

When they had set up, students had the chance to roam the room and look at other schools’ work. Projects were broadly organized into three categories — Civic Engagement & Leadership, STEM & College Access, and Health & Wellness — and several topics appeared again and again around the room, including homelessness, women’s health, and immigration. 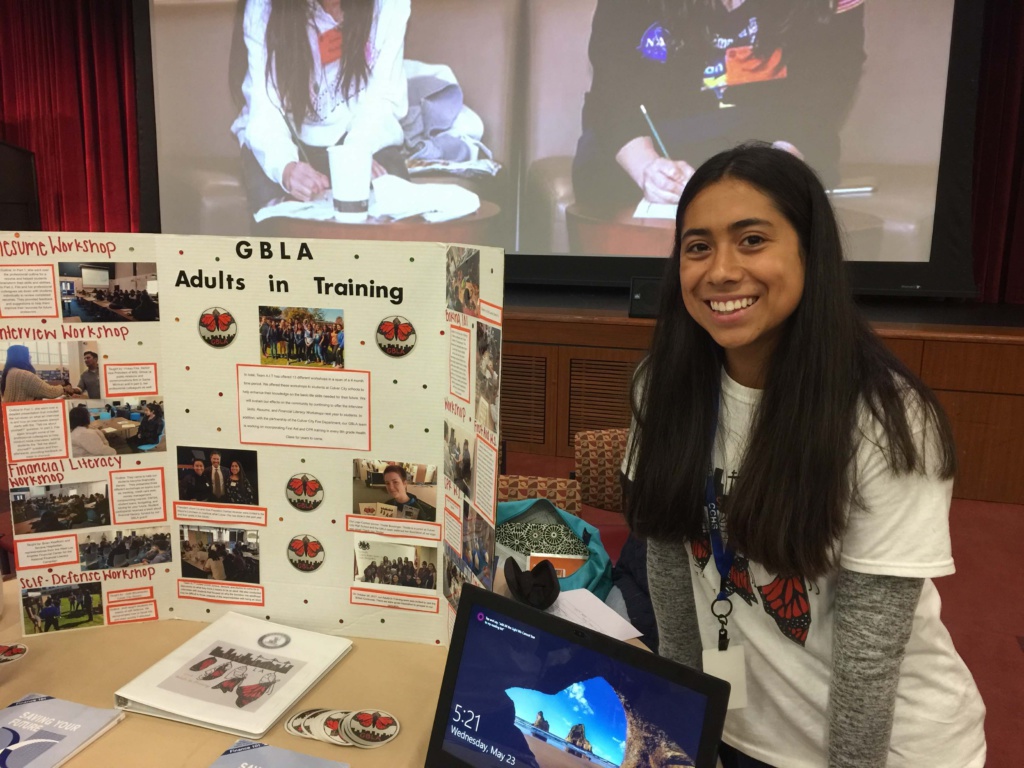 Teams shared with each other what they had learned about their topic and how they themselves had grown over the year. The team at Manual Arts High School, Chicas Verdes, held a community tree-planting day, planting twenty trees at their school and over twenty more elsewhere in the surrounding neighborhoods. They also held a farmer’s market at the school and educated peers and community members about healthy nutritional choices. “I learned to be more aware,” junior Tiffany Castillo said. “I never knew that we were living in a food desert.” Many students expressed astonishment at how little they had known about a given inequity before starting to study it, but they described that realization as empowering, not intimidating. “I learned this year that I could be a better person,” said Jimena Cabrera of John Muir Middle School. “Being here, hearing about the other projects, inspires me.”

All around the room, teams talked about raising awareness within their team, among their peers, and in the larger community. At James A. Garfield High School, the Girls Build team — Dreamers sin Fronteras — worked to empower undocumented members of the community, especially students, who have felt increasingly vulnerable since the 2016 election. The goal of Garfield’s team was, as they say on their website, “to bring awareness to the concerns of undocumented students and offer free legal help by contacting lawyers and hosting DACA informational events.” Senior Melissa Barales-Lopez from Dreamers sin Fronteras, who will attend Dartmouth in the fall, acknowledged the challenge of raising awareness and explained how Girls Build provided the tools to meet that challenge: “For our team, Girls Build was all about community engagement. Incentivizing our community at first was such an obstacle, but through those [Girls Build] resources, through their mentorship and guidance, we were able to make our communities care about the problems we were facing. People aren’t aware; people aren’t informed. Having the Girls Build resources, workshops, webinars… I watched every single one of them, it just helped all the more. It allowed us to really uplift our community.”

Throughout the evening, students saw how the different schools’ projects complemented and completed one another. If a team wants to help girls have the confidence to succeed in STEM classes, as Larchmont Charter School, Grenada Hills Charter HS, and Palmdale Learning Plaza did, that project will be more successful if the girls in the classes have access to nutritious meals. Creating that access involves educating the community and spreading awareness. But teams also learned that personal choices can only do so much against systemic obstacles. As several teams studying health and nutrition pointed out, many schools are surrounded by places to buy fast food but almost nowhere to buy fresh fruit or vegetables. The desire to challenge laws and distribution of resources in the county (and the country) fueled projects in the Civic Engagement category. At Compton Early College High School, the CEC Change Agents held voter registration drives and a town hall. They were recognized as a runner-up when prizes were awarded. Alliance Simon Technology Academy’s Social Justice Student Organization (which took home the Grand Prize among high schools, with a $1,000 award) worked with community organizations to request change from the city council, as sophomore Estefani Hernandez explained: “We noticed that a lot of street vendors in our community were being mistreated. We wanted to make sure that they are able to sell safely on the street. We managed to talk to the LA City Council, and they actually passed legislation legalizing street vending.” 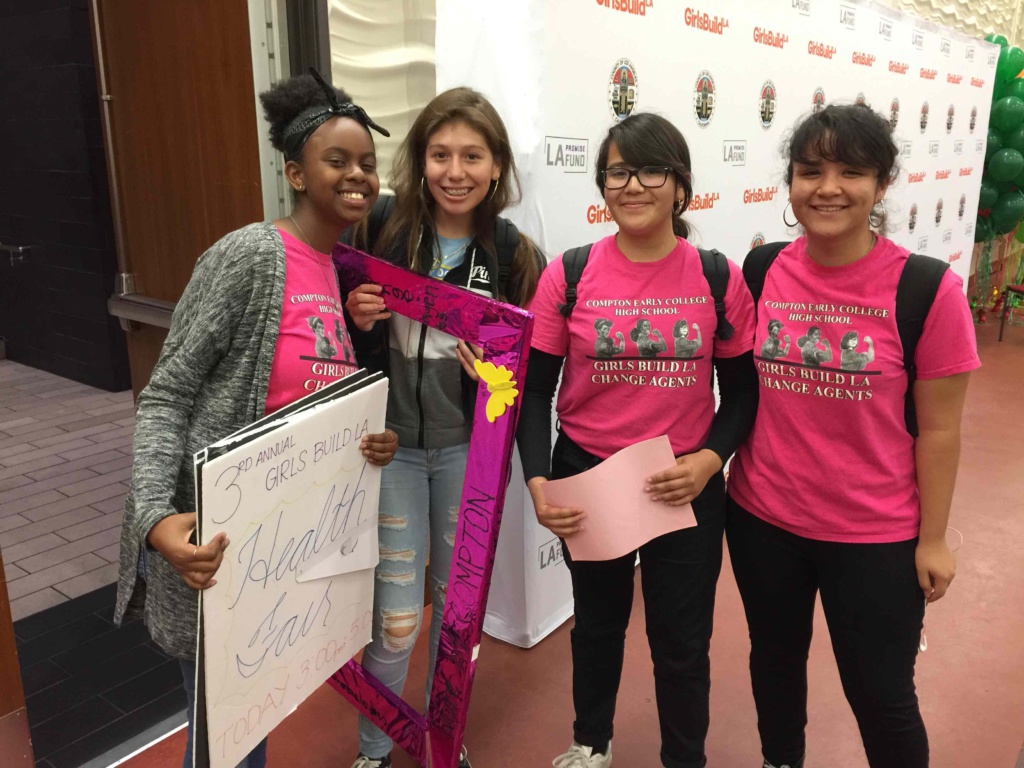 Addressing the gathering of girls at the end of the evening, Edna Chavez, a Manual Arts Senior who spoke at the March for Our Lives in Washington, DC, encouraged the teams to be optimistic about the impact of their work. “A ripple starts small,” she said, “but it grows.” Sara Hernandez, CEO of non-profit HYPE and a former candidate for Congress, agreed. She told the roomful of girls, “Your courage and honesty are forcing change in this country.”

A full list of prizes and links to websites documenting each team’s project can be found on our Girls Build LA weebly page.