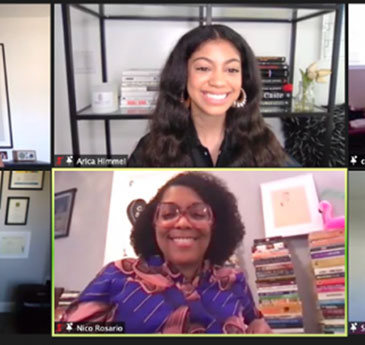 Posted at 06:47h in Education, Home, News by support@citrusstudios.com

Students from LA Promise Charter High School (LAPCHS), Crenshaw High School and Susan Miller Dorsey were invited to a viewing of mixed-ish episode “Pride (In the Name of Love),” which depicts the first Martin Luther King, Jr. national holiday in 1986 and its impact on the Johnson family.  The virtual conversation and student-led Q&A that followed the screening responded to questions from the students about all aspects of the show, and the panelists got a chance to discuss their experiences about being a part of such an impactful cultural beacon for Black American heritage.

The students were thrilled to be able to interact with some of their favorite TV stars, especially because the program was designed as a live, virtual field trip. “It felt like we were actually having a conversation,” said Heaven from LAPCHS. Some students were even able to ask their question directly to the panelists, which proved a little overwhelming for Tariq, a student from Dorsey: “It was very nerve racking asking my question because Tika Sumpter is one of my favorite actresses ever! It was so exciting to see that SHE was the one who answered my question on top of that!”

These types of experiences make partners like Disney so integral to the work we do with Career Pathway Connections, where we create space for students to engage with professionals in a meaningful way. “I got to learn more about how media productions work from actual, known actors in the industry,” said Tariq. “That’s really incredible!”

Learn more about getting involved with LA Promise Fund through The Intern Project where students get hired by companies, improve their professional skills and earn college credit  – http://theinternproject.org