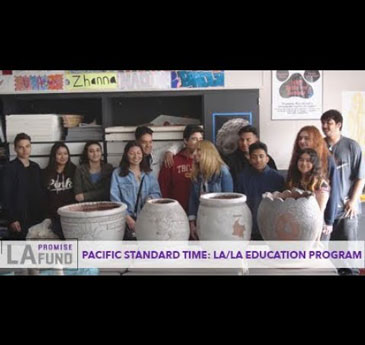 Posted at 00:10h in Education, Home, News by support@citrusstudios.com

Learn more about the program by visiting artsmatter.org

Los Angeles is the world capital of media and entertainment, yet most LA schools do not prepare students to take on jobs in these industries. ArtsMatter addresses this problem by creating and sharing its dynamic suite of educational programming in media arts with students and teachers across LA.

Through its transformation of popular content from top artists and creators into standards-based instructional materials, the publicly accessible ArtsMatter curriculum can advance media arts learning not only in LA, but in every city across the country.

Through a series of thematically linked exhibitions and programs, Pacific Standard Time: LA/LA highlighted different aspects of Latin American and Latino art from the ancient world to the present day. With topics such as luxury arts in the pre-Columbian Americas, 20th century Afro- Brazilian art, alternative spaces in Mexico City, and boundary-crossing practices of Latino artists, exhibitions ranged from monographic studies of individual artists to broad surveys that cut across numerous countries.

Supported by more than $16 million in grants from the Getty Foundation, Pacific Standard Time: LA/LA involved more than 70 cultural institutions from Los Angeles to Palm Springs, and from San Diego to Santa Barbara. Pacific Standard Time was an initiative of the Getty. The presenting sponsor was Bank of America. Major support for the PST: LA/LA Education Program was provided through grants from the Getty Foundation. Additional support was provided by Sony Pictures Entertainment Inc.

The LA Promise Fund launched ArtsMatter in October 2012 to address the need for increased arts and creativity in LAUSD. At the time, only 2% of elementary school instructional time in LAUSD was being devoted to the arts. This outdoor city-wide campaign featured the inspiring work of some of our nation’s most revered modern artists, including Barbara Kruger, John Baldessari and Shepard Fairey. It raised $1 million, which was distributed to arts partners, including CalArts, J. Paul Getty Museum, The Music Center, Mattel, and Urban Arts Partnership to bring the arts to students across Los Angeles.